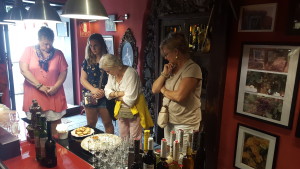 The island of Tenerife with hundreds years of wine production traditions is an ideal destination to discover local wines in different corners of Tenerife.

Actually Tenerife Host preparing our VIP Wine Tour schedule and details to put the tour to our VIP private tours offer and make the tour available both for tourists living in the island resorts as well as for travellers coming with cruise ships to Santa Cruz de Tenerife.

During the tour we will visit both vineyards and wine houses, museums of local wines, having at least 3 different wine degustations and a lunch tasting local island’s dishes in a incredibly beautiful place with a scenic views of the island of Tenerife.

To book the VIP Private Wine Tour in Tenerife, please, use the contact form at Tenerife Host official website.

Previous postChoose a right restaurant for a lunch in Tenerife
Next postWhich tour take to see the whole Tenerife island?