Tenerife Host offers private shore excursions by coach for groups from cruise ships in Santa Cruz de Tenerife. This is better alternative for standard bus tours, if you have a group of friends or families and wish to go in a private group from 8 to 70 people. That means you will get the bus and one of our best guides exclusively for your group, no matter what’s the size of the group. 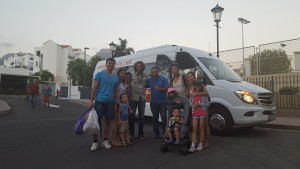 Generally you can choose a 6 hour long private sightseeing tour to the heart of the island of Tenerife – Teide Volcano and National Park.

If you are interested to see how different the island is on every part, we’ll recommend you to do 8 hour long private sightseeing tour – shore excursion to visit not just volacano and Teide National Park, but also Masca village, hidden in the beautiful Teno Mountains; Garachico – cozy town which was first capital and the most important trade harbour of Tenerife three centuries ago until it was destroyed by huge volcano eruption; the historical center of Icod de Los Vinos – the town where you will see the oldest Dragon Tree in the world.

This private shore excursion by coach for groups from cruise ships in Santa Cruz de Tenerife is a perfect mix of nature and history of the island.

If you have your own ideas about the places you wish to visit and things to do during your day stop in Tenerife, we can plan the individual tour especially for your group.

To book your private shore excursions by coach for a group from cruise ships in Santa Cruz de Tenerife, please, send us your Booking Message with dated, times and group details.